Home Luxury Cars Why LaGuardia Is Such A Mess Right Now, And How To Navigate It

Why LaGuardia Is Such A Mess Right Now, And How To Navigate It

May 15, 2017 By admin Luxury Cars, Uncategorized No Comments

In the wake of Monday’s traffic nightmare, which compelled LaGuardia airport travelers to abandon cars and cabs and walk along the highway dragging their suitcases, the developers heading up Governor Cuomo’s Terminal B facelift have acknowledged the extent of this shitshow.

“We are aware of the stress this is causing, realize it is untenable, and apologize to passengers,” said LaGuardia Gateway Partners in a statement.

But while traffic may have been particularly heinous on Monday—thanks in part to a brief security breach and lockdown at Terminal B, the same terminal undergoing construction—the culprit traffic pattern, at the 94th Street airport entrance, has been in effect for a while now—since Sunday August 7th.

According to LGA, the detour is accommodating crews working on a new parking garage. The airport has posted a map of the detour online, which looks relatively benign considering the drama it’s caused. Because the entrance ramp at 94th Street is closed, cars headed in and out of the airport are confined to a single intersection. 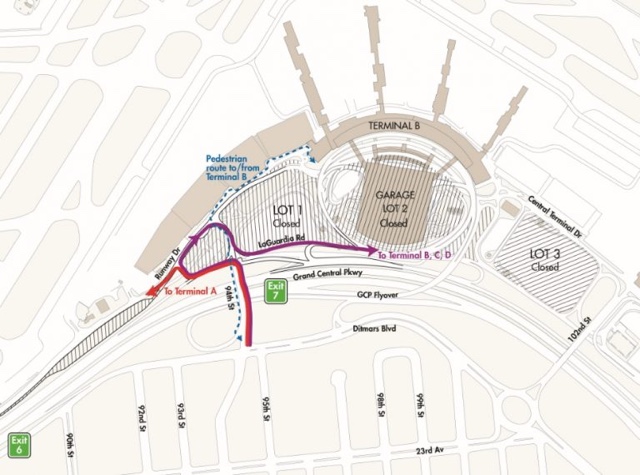